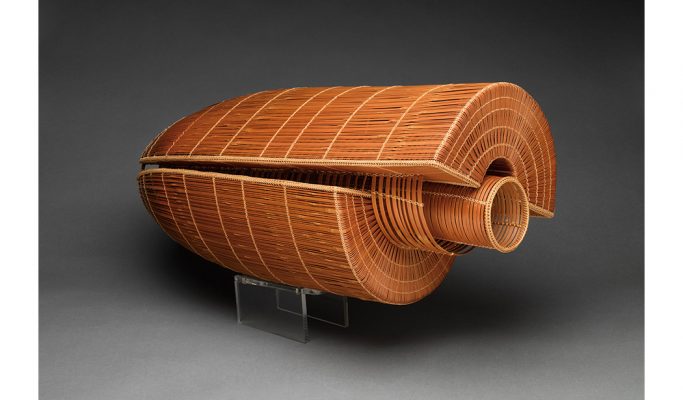 “Day of Osutaka Mountain (1986),” at Tai Modern gallery. This is bamboo artist Yako Hodo’s personal response and memorial to the victims of Japan Airlines Flight 123, which crashed on Osutaka Ridge on August 12, 1985. It is the worst single-aircraft accident in history, taking the lives of 520 people. In the Buddhist faith in Japan, departed souls become part of a collective ancestral being after a period of 33 years. The artist kept this piece in his personal collection for that time period to honor the victims of the disaster. “Day of Osutaka Mountain” will be exhibited publicly for the first time at Asia Week New York 2019. (Image Courtesy: Tai Modern)

We cannot ignore Asia,” said Mike Hearn, Chair of the Asian Art Department at the Metropolitan Museum of Art, to a nodding crowd of collectors, dealers, and journalists, gathered in anticipation of Asia Week New York, an annual 10-day celebration of Asian art.

To those in the room, this was old news. But to many in the West, it is a wake-up call. Indeed, Hearn, in his opening remarks, cited a five-part story that recently ran in the New York Times detailing the rapid rise of China into an economic juggernaut and how the West, and the United States in particular, repeatedly underestimated China’s trajectory as a world power.

The 2019 edition of Asia Week marks the 10-year anniversary and, to celebrate, the association will honor 10 individuals for their contributions to Asian art. Though Christina Prescott-Walker, chairman of Asia Week New York, couldn’t release the names of the winners at the reception, she described them as a distinguished group of “collectors, dealers, academics, and museum professionals,” each of whom has helped raise awareness and appreciation of Asian art.

Among the honorees are Joan Mirviss, a top dealer in Japanese art, co founded the Asia Week New York Association and served as its first chairman; Shelly and Donald Rubin who, in 2004, founded the Rubin Museum of Art to showcase their extensive art collection, more than 3,300 objects, from Tibet and Himalayan regions; Soyoung Lee, a former colleague of Mike Hearn’s at the Met where she worked for 15 years specializing in Korean and Japanese ceramics from 1400-1700, and is now Chief Curator at the Harvard Art Museums. Other distinguished individuals who will be honored include curators Mike Hearn, Stephen Little, and Amy Poster; collectors Diane and Arthur Abbey, Dr. Julia and John Curtis, Elizabeth B. “Lillie” and Edward Johnson; and the dealer James Lally. Asia Week, which will take place March 13-23, began with 16 galleries and has since grown to 48. Seven new galleries will take part this year including Simon Lee from New York, M.D. Flacks from England, and Hara Shobo from Japan.

In addition to the galleries, six auction houses (Bonhams, Christie’s, Doyle, Heritage Auctions, iGavel, and Sotheby’s) and several museums will participate. Hearn proudly noted that, “Asian Art has become one of the main areas of emphasis for the Met.” Indeed, “The Tale of Genji: A Japanese Classic Illuminated” will be the Met’s major spring exhibition and will open March 5, in advance of Asia Week. Produced in the early part of the 11th century, “The Tale of Genji” is the most celebrated work of Japanese literature and some describe it as the first psychological novel. The exhibit includes more than 120 works of art, from the 11th century to the present, ranging from paintings, calligraphy, Contemporary popular art like manga, silk robes, and more.

The press reception was held on the Upper East Side at the apartment of Michael and Lisa Hughes. Hughes, who spent 16 years as Chinese specialist with Christie’s in London, New York, and Los Angeles, has been an active participant in Asia Week since its inception. He collects Asian art, some of which was on display in his Upper East Side apartment.

In a phone interview the next day, Carol Conover, Director of Kaikodo gallery in New York and former chairman of Asia Week, echoed Hearn’s opening remarks. Whereas the market used to be more international and only included about a hundred buyers, “the entry of the mainland Chinese money and collectors has completely changed everything,.” “[Americans] can’t compete,” said Conover. “It means more to them than us.”

This column appears in the February 2019 edition of BlouinShop. Subscribe at www.blouinsubscriptions.com