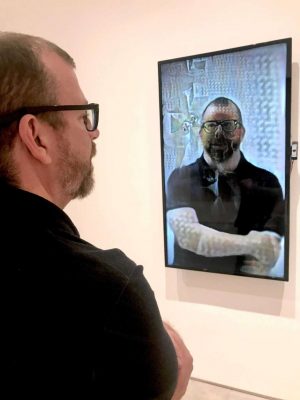 Standing in front of his piece “FaceOff (v. Inman),” artist Jason Salavon morphs into Kanye West, Nick Cage, a cat and a clown.

Or rather, his reflection in a monitor changes, thanks to a webcam and custom software that produce real-time video based on a catalog of 14 models. “This is the weird art version of an app that knows your face, draws the background, knows where you are,” he says. “It’s pseudo-randomly mixing and matching stuff, playing around with opportunities of surprise and weirdness.”

You can’t step in front of it without seeing how easy it could be for someone to pull a Nancy Pelosi “deep fake” video scam on you. Salavon uses the word “weird” a lot to describe the effects of his art, but the tools he employs are really the new normal in a world increasingly shaped by artificial intelligence.

From a conceptual perspective, it’s about exploring individuality in the 21st century. “There are 7 billion humans. Each one of us is unique, but there are lots of similarities and repetition,” he says. “With technology, our civilization is harnessing that tension in all kinds of weird ways. Facebook literally knows about 2.5 million people with some level of detail.”

Salavon also is interested in aesthetics. “Little Infinities,” the show’s title work, is about as minimal as his work gets, although it has maximal content. It’s a custom wallpaper print whose thin stripes contain 1.2 million images — the entire data set of the ImageNet, a global source of photos that companies use to teach machines to recognize objects. (You’re going to want your self-driving car to know a truck, a pedestrian, an animal and a stop sign when it approaches one.)

The wallpaper has 1,000 stripes, each made from one of the ImageNet’s 1,000 categories. Colors emerge because the categories depict similar things: School buses, for example, tend to be yellow. Some categories of the database have fewer images, so those stripes are shorter.

Salavon’s “Narrative Walk” series presents the most compelling sorcery. These three works — based on illuminated manuscripts, newspapers and website pages — each have a monitor that looks like a window into a collaged base made from thousands of pixel-sized images. The image on the monitor is unique, however — being drawn, in real time, from aggregated elements of the collage.

You can’t actually read any of this odd blend of reality and fiction. The form itself is a kind of content, Salavon says, pointing to suites of drawings captured from some of the video images. “I’m hesitant to use the word uncanny, but we’re definitely interested in the weirdness of recognizing the form and structure of something and not being able to decode it.”

The son of an artist, Salavon painted and drew as a kid in Fort Worth. When he made his first algorithm-based works in the early 1990s, his professors and peers didn’t get it, he says. “It didn’t feel like what people thought art was.”

He briefly worked as a video game programmer, but didn’t love the commercial side of the business. By 2000, during the first wave of energy around art based on “computational engagement,” his art was chosen for a Whitney Biennial. Now, as a new generation of artists more comfortable with “neural network architectures” establishes itself, he sees a second wave about to crest.

Painting will always be a stalwart, Salavon says, “but I think it will become a more plural kind of space where everything is happening, and a lot of it will pass through computers.”