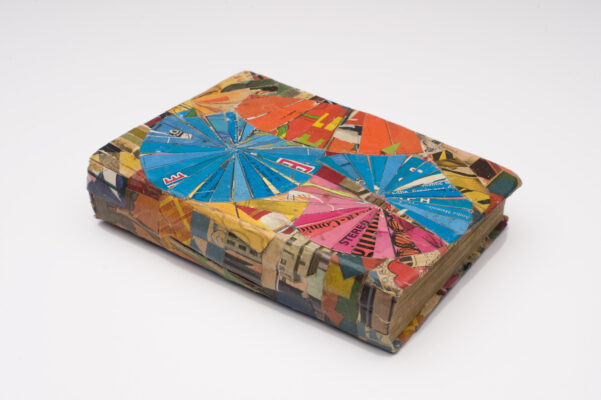 Lance Letscher has said that making art was “a foundational element of my personality.” His mother was a graduate of the art school at the University of Texas at Austin, where Letscher grew up being given art supplies for Christmas and birthdays. At UT, Letscher found the medium of printmaking to be a natural extension for his drawing skills, and through it he developed his understanding of color — particularly — he has said in previous interviews, “color harmonies, mixing and balance.”

Letscher was trained as a printmaker at the University of Texas art school, where he received his bachelor’s and master’s degrees and attracted notice in the 1980s Dallas art scene for his small sculptures, before transitioning to drawing, print-making and eventually collage. He is also the author and illustrator of the children’s book “The Perfect Machine.”

After graduation, Letscher worked for Amado Peña, the New Mexico artist known for his Southwestern-style prints. This essentially created an apprenticeship for Letscher, which he has called an invaluable learning experience in both applying color and watching a commercially successful artist at work in the world.

“There is a definite art to marketing your work and presenting yourself in a professional way,” Letscher said in a 2004 interview. “A lot of artists have a romantic or Bohemian attitude to their work. It may work in the studio, but it doesn’t work when approaching galleries.” Letscher is represented by a dozen galleries around the world, and a show of his work opens at Eight Modern on Delgado Street today.

The show, called “Twenty-Five Books and an Ear,” is “primarily comprised of collaged books that are meant to function independently as well as, hopefully, gain some energy and momentum as a group,” Letscher said of his second solo show at Eight Modern. As for the show title, it “is intended to open several possible avenues of interpretation, one being an oblique reference to the Van Gogh ear mythology: the ear as a symbol of the ultimate artistic effort or offering. Also, it alludes to the idea of an audience for the contents of the books.”

The “Ear” of the title takes concrete form in “The First Man,” a carving of a life-size human ear emerging from a block of marble. The sculpture was made by the artist almost 20 years ago, before he had begun working in collage, when he was known primarily as a talented sculptor of marble and wood.

About 18 years ago, Letscher began working in his current medium, collage. Collage – constructed assemblages from found materials – is often found on the edges of art. Visually and conceptually, collages challenge the viewer to consider a world made of parts that total more than their sums. Many critics think this is especially true of Letscher’s work. His creations made with bits of old books, handwritten letters, ledgers and other manuscripts have received international acclaim.

His sculptures were heavy and, paradoxically, fragile and he had a hard time getting them into galleries. While working three jobs, Letscher started making “simple, small drawings to work through ideas – cutting them out and superimposing one upon another to get more density and depth. That’s how the collages started,” he has said.

A lifelong Austin resident, Letscher has built a regional, national and international following, exhibiting throughout the United States, as well as in Paris, Berlin, Munich, Barcelona, London and Poland. In 2004, a mid-career retrospective of the artist’s work titled “Books and Parts of Books: 1996-2004″traveled to four museums. In 2009, the University of Texas Press published a full-length monograph on his work.

For nearly 20 years he has worked nearly exclusively with harvested papers such as old books, records and other found materials. After careful selection, Letscher painstakingly slices them into strips and shapes, assembling thousands of them into stunning collages. In “Twenty-five Books and an Ear,” Letscher invokes his medium’s origins.

“The books, jacketed with relics of other volumes, both embody and honor a history of the written word,” gallery owner Margo Thoma said. “Fragments of text and images ignite the imagination and offer countless associations without insisting upon any of them.”

“Recognizable elements of books – their spines, endpapers, marginalia, illustrations and pages of text meticulously shredded and recombined – are visible in many of these works, giving them the appearance of tessellated anthologies,” wrote Albert Mobilio about Letscher’s work in Bookforum. “A lifetime of literacy – from first scribble to adulthood, from the smell of kindergarten Crayolas to the purposeful study of workaday instructions – is filleted and condensed to produce a melancholic narrative, one that registers just how deeply our personal history is enmeshed with books, pens, and paper.”

Despite his meticulousness and discipline in the studio, Letscher strives to let his creative choices be as unconscious as possible, guided by “an unseen hand.”

Letscher told Bleach magazine that he tries to “stay out of the way (of the work) as much as possible.” The artist cultivates a near-ascetic working method that eschews potential distractions, explaining, “I stopped listening to the radio while I worked (I work alone) to promote a more profound sense of boredom which I hoped would improve the work. The work did get better, but it has made me into a very dull person, especially socially.”

Writing in the Austin Chronicle in 2004, Madeline Irvine claimed that Letscher’s very reticence and reclusiveness have created a “mystique” around his work and that his extraordinary focus is a key to the quality of his pieces. “Letscher has worked on his art assiduously, even while holding down other jobs and raising a family,” she wrote. “Those years may have limited the amount of work he was able to send out into the world, but that added to the mystique. These days, Letscher’s shows are a sea of red dots — the art world’s discreet ‘sold’ sign.” He has been able to make a living with his art for more than 10 years now.